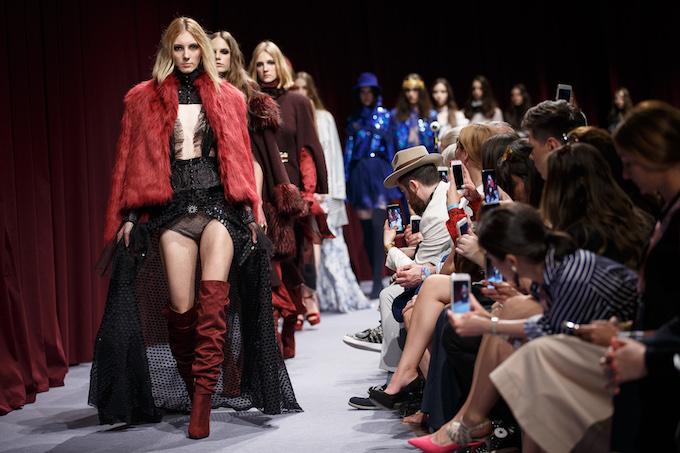 We already reported in February that further on the Hungarian Tourism Agency will be responsible for the development of the Hungarian fashion industry instead of the Design Terminal.
At the beginning of this year, during the bustling of International Fashion Weeks we watched if the new team would go for the usual Spring Budapest Fashion Week in April, despite the narrow timeline, or they would leave it and concentrate on the more important Fall/Winter season.

The Budapest Central European Fashion Week held last month proving that the new team went for the bolder option.
If I had a picture about my green hat, I wore on the first day of Budapest Fashion Week that is what I would insert here, but because my photographer couldn’t attend (see reasons below), my hat-off is just verbal: They did it! 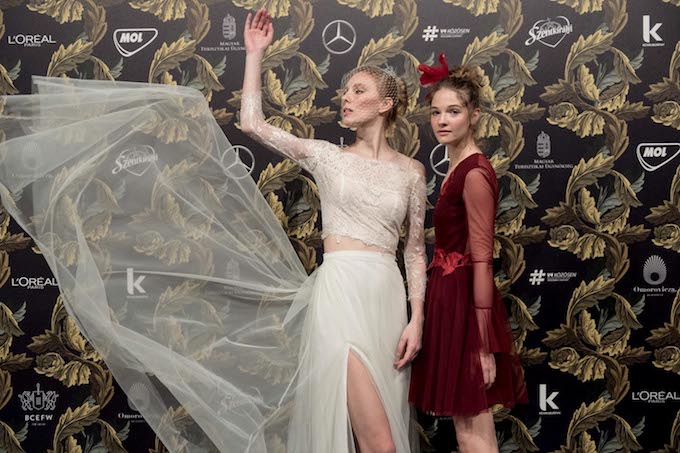 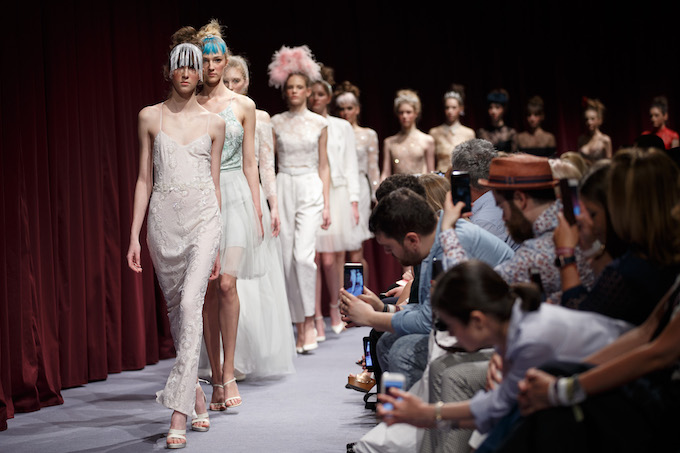 As an introduction we share our general outlook of the event and the vibe surrounding it. And additionally we would like to show a broader spectrum of opinions with different personal experiences on location. 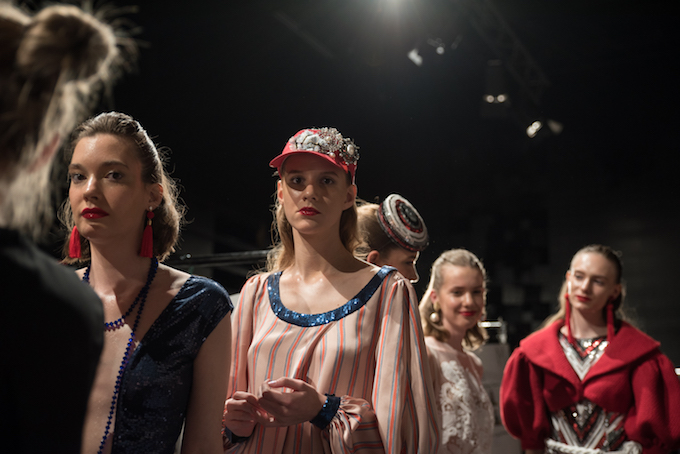 The modernised lion-crest logo resembling to a crown as a whole was absolutely adorable. The preliminary communication and social media presence was promising too. 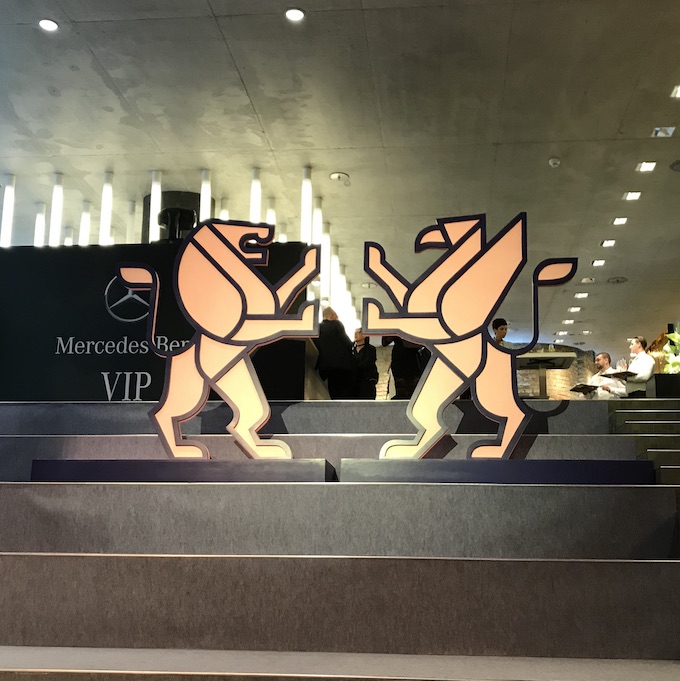 In general there was a pretty solid hype around the upcoming event. According to press information fashion editors working for Vogue, Harper’s Bazaar, Elle and Glamour, bloggers, street-style photographers have been invited from all around the world e.g. form Los Angeles, Barcelona, Paris, Berlin, Amsterdam and V4 countries. We would publish the detailed list of names of the invited and the publications thanks to these conferences as soon as our questions regarding the matter got answered by the PR department of the Hungarian Tourism Agency. 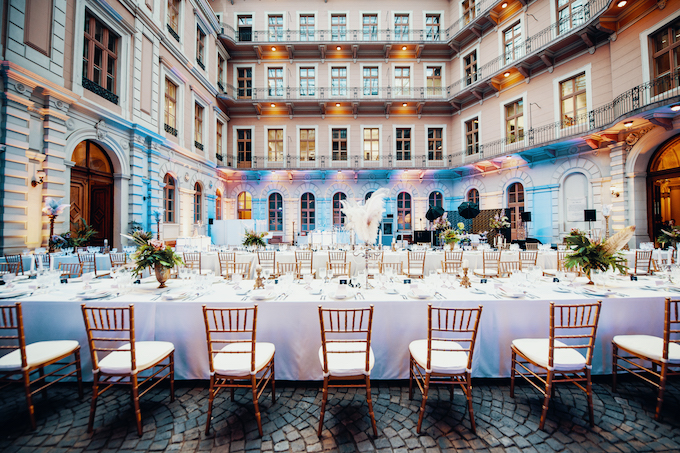 The exclusive Front Row Dinner, where we could have met these prominent international people, had been taken place before the first day of shows. Although, we cannot report about it, because alongside other respectable members of the industry, we was not there, since our press registration has been approved that night after the dinner, merely 9 hours before the first show. This short notice wouldn’t be enough for me to gather my photographers either.

Despite the not to fortunate time frame of the event (1 May, long weekend) quite high numbers of visitors were interested. Although it is true, that the evening shows were more crowded, the afternoons were pretty quiet.
In opinions of the majority of the visitors the Castle Garden Bazaar is suitable for hosting fashion shows dealing with the flood of audience. So even though we loved the building of The Museum of Applied Arts in last October and the brilliantly used spaces in the Ludwig Museum before that, we did not mind to return under the Buda Hills.
But the arrangement of catwalk was not too successful. I asked a lot of people about it. Some of them attended just one show, some have seen almost all of them. There were people who regarded the space as a professional, others were merely spectators and some who have seen there their first show ever. Woman, man, young and elderly. 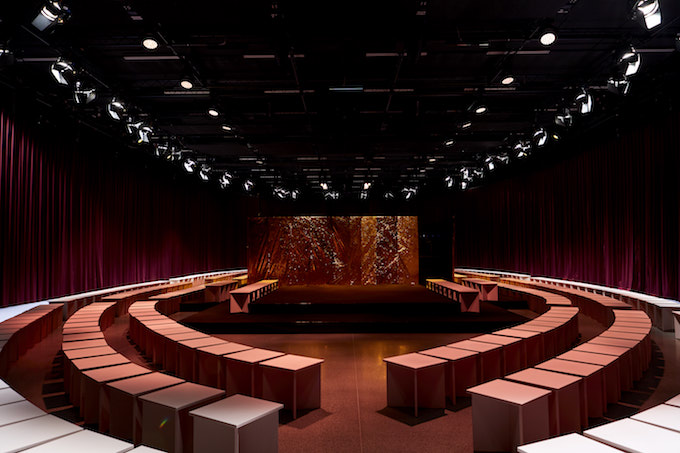 I don’t have a representative survey, but I tried and tried to find someone who liked it or said something positive about it. But instead here is what I heard:
“You can have a proper look of the dresses just from the first row. To take a good photo or video is very difficult. This might be the message of: Live in the moment.” 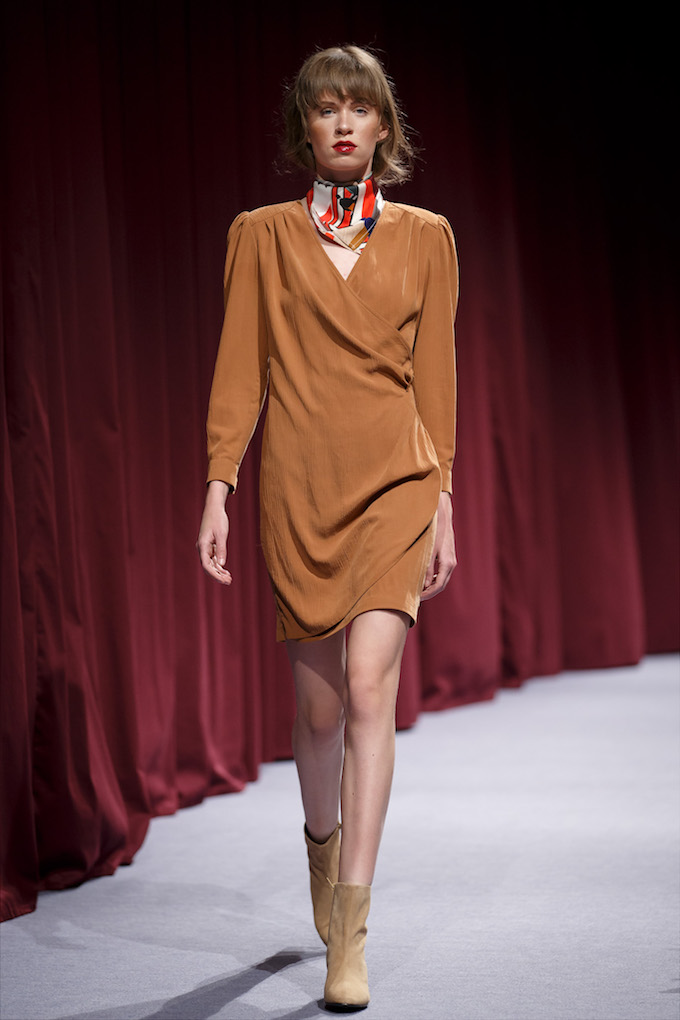 “The maroon draperies remind me the provincial settings of a countryside Cultural Centre. It could be fine for a show or two but for all of them, it feels gloomy.” 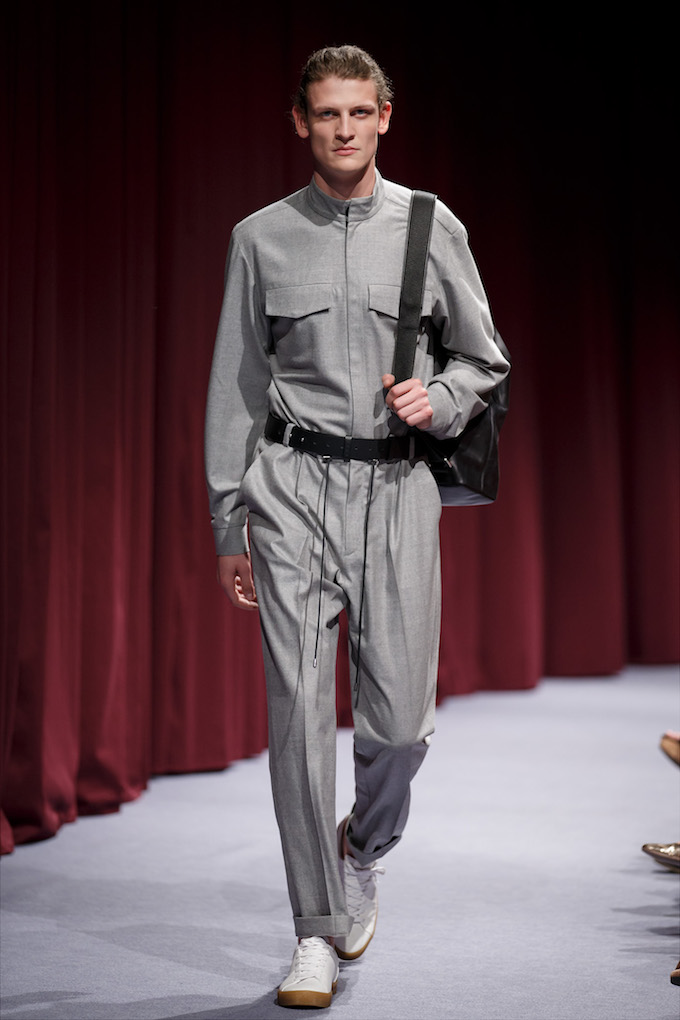 “The grey carpet is the trademark of old-fashioned offices. It feels very out-of-place here.” 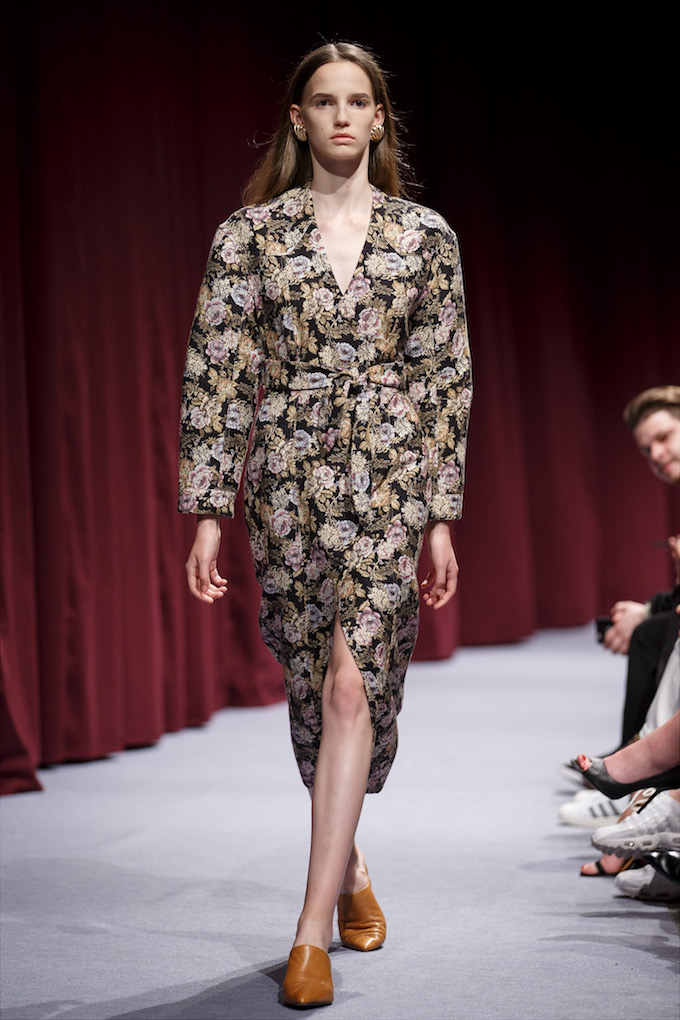 “The oval settings feels like an arena. But the thousands of years’ experience already proved that it works when the spectators are on the outer rim and the sight is in the middle.”
“When a designer bows after the show only the 20 percent of the audience can see that.”
I also felt that the delight of the shows was spoiled by the unusual lighting setup and the arrangement of the catwalk. When I was not sitting in the first row, I could see the garments just from the thigh up from the second row, but just from the waist up from the third row.
In my opinion, in a city where the tradition of fashion weeks are still a work in progress and where the event is equally targeting the professionals of the industry and the ticket purchasing audience, there cannot be the aim of excluding people randomly, and making the pleasure of the garments exclusive only for the insiders. 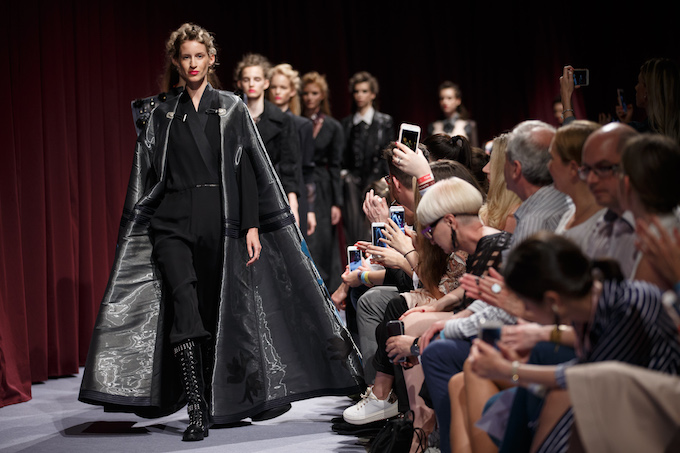 The recitation in the title of this article is from one of my acquaintances who, because he was out-of-town, followed the events through photos, so he demanded from me to show the real catwalk finally. When I told him that this is the only one he said the comment in her disappointment. 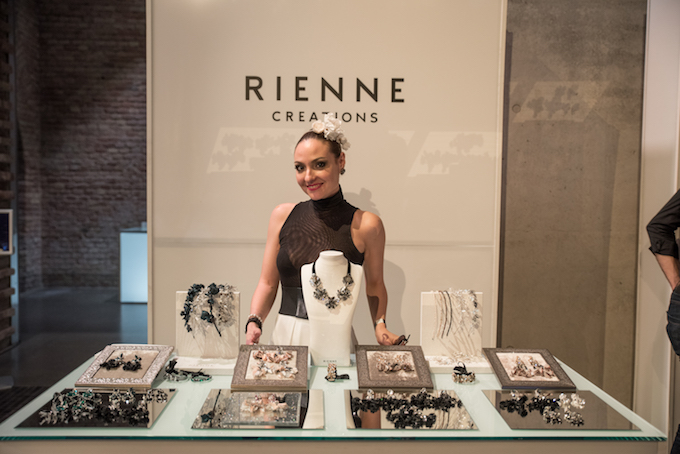 To ease on this harsh statement I would like to highlight that the booths in the hall were very well located, and the press lounge and work corner were highly welcomed innovations and hopefully to be seen next time.
Alongside with the events of the Fashion Week and after them for two weeks they provided sales opportunity to Hungarian, Czech, Ukrainian and Polish designers in the MOL Pop-up Store located in the Ybl Palace. This was an excellent idea but it would have been more effective if, similar to the Wien Fashion Week, the sales of the goods and the actual shows would have been closer to each other.
__________
English by Annavirag Klausz
Photos:
Endre Holecz / MTÜ – Runway
The Fulldog / MTÜ – Backstage, street style