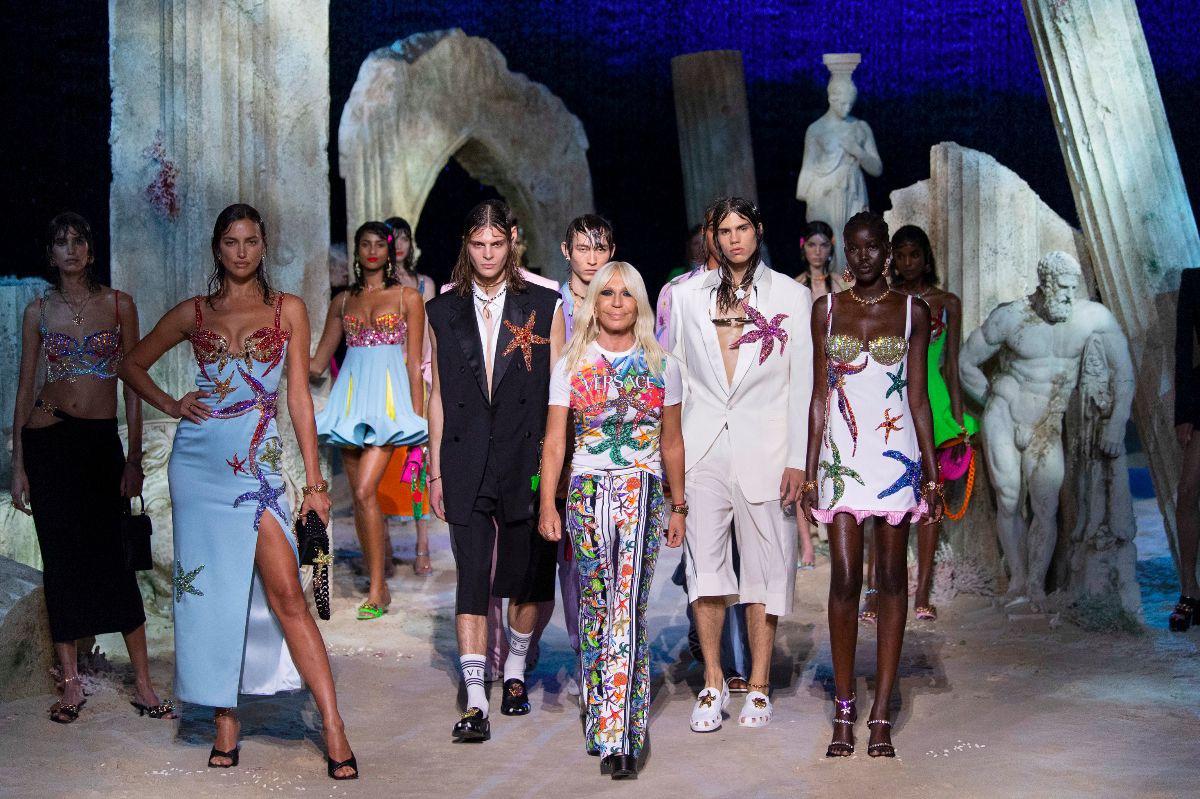 As COVID-19 hit Italy last February as a shock, the last shows of the Milan Fashion Week were suddenly cancelled. Later, the entire country went into a lockdown. However, rather than reflecting on this science-fiction atmosphere of the pandemic, Italian designers dreamed of a much more hopeful, colorful, blossoming spring-summer 2021.
The Milan Fashion Week of September 2020 is a great example of how digital technology and the traditional catwalk can create a wonderful experience together. The choice of venues, the combination of exteriors and interiors, or even the creations of theatrical, fantasy worlds all guide the viewer into an environment which is very desired at the moment. Meanwhile, also countering the common misconception about Milan regarding its lack of tourist attractions by exposing the multiple faces of the city.

Valentino
Instead of Paris, the fashion house chose Milan as venue for the presentation of its spring-summer 2021 collection. Models walked surrounded by the eclectic effects on an industrial environment decorated with floral compositions, accompanied by the live performance of British singer-songwriter Labrinth and two vocals.
The SS21 line includes both men’s and women’s prêt-à-porter, ranging from black and white minimalist designs to colourful, voluminous and airy creations. The venue, the designs and the music altogether create an atmosphere that echo romanticism. Pierpaolo Piccoli has created the desired sense of spring-summer by elevating contemporary fashion design to an ethereal level.
Hugo Boss
CEO Ingo Wilts described the brand’s SS21 collection as it’s “most relaxed collection ever”. However, besides the looser silhouettes, the collection was still dominated by precisely tailored suits and blazers combined with larger evening skirts and trousers. Coverall pieces were also displayed along with the different shades of light blue, nude and dark green. The boundaries between formalwear and informal clothes were blurred by the abstract prints of London artist William Farr, adding an artistic touch to the collection.
Giorgio Armani
The designer unveiled his spring-summer 2021 season titled TIMELESS THOUGHTS. From daytime, everyday business wear to the red-carpet dresses, the fashion house is characterized by loosely worn elegance.
Besides the new collection, a film presenting Armani’s ars poetica and his decades of work was also released. The essence of Armani’s mission, redefined from time to time and with fresh inspiration, is to create clothes for real people who love and wear them, and not for the l’art pour l’art, far from the reality. According to Armani, fashion does not only reflect on our societies, but also influences their future, thus playing an important role in continuous development. To emphasize this message, male and female models marching on the catwalk presented timeless pieces for next season with a subtle, hopeful smile on their face.
Moschino
One of the most magical surprises of this year’s fashion weeks was Moschino’s marionettes fashion show. The designer of the house, Jeremy Scott, meets his own marionette who invites him to sit down and watch the show. In a narrow space, evoking the atmosphere of early fashion shows in salons, the marionettes of Anna Wintour and Edward Enninful could be recognised, as well as Gigi Hadid’s, who opened the runway dressed in a golden brocade. All other marionettes display influences and models. Jim Hensen’s studios can be praised for the wonderful marionette show. For me personally, the fashion film titled “No Strings Attached” and its cinematic charm evokes the characters played by Grace Kelly in Hitchcock movies.
Versace

Inspired by his brother’s, the late Gianni’s 1992 “Sea Treasures” collection.

A scenery representing a mythological world served as the setting for the show. Ruins of ancient statues and Doric columns were displayed on the square of Versacepolis, where all kinds of mythical creatures live together peacefully.
The story: Medusa was once the most beautiful woman in Athens. However, her charm did not go unnoticed by Athenians who exiled her in their jealous rage. Versacepolis is a utopian city on the seabed reigned by the charismatic Gorgon inhabited by strong and confident men and women.
The thought that more than eighty percent of the ocean is completely unknown to man, leaving the surface of the Moon more precisely studied than the bottom of the ocean, has inspired Donatella Versace. Thus, she dreamed about the mystery of deep blue waters and set up a world of fantasy where she would bring us away from the alienating world that we live in today.
While the ocean can sometimes be perceived as rough, it can also cleanse, calm and refresh us. Contrasting the deep blue tones of the ocean and its silence, the designer uses vibrant colours, patterns and prints. Nature, athletics, seduction, love and fantasy all appear in a hedonistic atmosphere representing the ultimate message of optimism and hope for the future.
Daydreaming is not merely an escape from reality, but an extremely human and undeniably real process. In Versacepolis, the mythology of the house blends with the beliefs of ancient eras and the unknown nature of today’s world.

Prada
Raf Simons, who has worked with several respected houses has designed and presented Prada’s SS21 collection. The marvellously produced virtual show was accompanied by Richie Hawtin, aka Plastikman’s. Following the show, in the second part of the film (which can be viewed below), Miuccia Prada explores the details of the collaboration and the collection during a conversation with Raf Simons.
Dolce & Gabbana
Few can take flaunt to such a masterfully artistic level as does Dolce & Gabbana. The show presenting the SS21 collection is teeming with colours and patterns in terms of both the line and the scene. The clothing line named Sicilian Patchwork evokes the thousands faces of the Italian island while paying tribute to Sicilian craftsmanship and tradition. However, I felt the music was too little compared to the richness of colours.
Alberta Ferretti
The fashion house's charmingly sexy line for spring-summer 2021 is full of delicate fabrics, airy silhouettes, bohemian blouses that bring together the desire for proximity with nature and the urban lifestyle. We can dress up in the sweet romance of blacks, whites, beiges and arousing pastel shades with Alberta Ferretti's wardrobe.

Fendi
There’s something sensational when a fashion show starts with contemporary classical music. The set of the show and the music accompanying the runway created a theatrical, yet ultramodern and easy atmosphere that aligns with the fashion house’s collection. The line consists of ostentatious, highly attractive silhouettes made even more appealing with the subtle variety of natural materials and textures. The collection was inspired by intimate moments that Silvia Venturini Fendi spent with her family in Rome.

Constant Renewal of Nature as an Eternal Inspiration - London, New York and Jacquemus

Both presentations of Saint Laurent’s SS21 men’s and women’s collections ...